“Hillary Clinton… When I see Hillary, I see someone barely able to conceal their malevolence. I see it as always present in her, an anger fused into her demeanor and thought. Behind the smiles and handshakes, it’s always there: this bitterness, this condescension, and a sense of no conscience, no soul.

What she’s done in office is awful. Her tenure as Secretary of State from 2009 to 2013 is full of serious problems, and that is comprehensively backed up by other Ambassadors from around the world, her own Secret Service detail, her own former aides, and a few good senior Senators who’ve watched her over the decades, people who have worked closely with her, had direct experience with her behavior.

And then there is Hillary the human, the individual being. A woman, without doubt, who is deeply disturbed. And in a very super zoomed out fashion, I feel sorry for her. There is just unfathomable psychological damage, and frankly, she should be in an institution under constant care and supervision.

I have always felt that the Clinton’s are a danger to the United States. And if you look at the history and ethical practices of the Clinton Foundation, you learn that it was full of wrongness from the very beginning; ripe with bribery, fraud, money laundering, extortion, racketeering and far more serious things like murder, treason, human trafficking. These things are whispers now, but they will come out in broad daylight, loud and clear, when the time is right.

And people say, ‘If the Clinton’s really are so criminal, then why haven’t they been prosecuted?‘ …

It has been difficult to indict the Clinton’s for their crimes because they have been protected by a shield of dominoes. What that means is that if they go down, so do a hundred other major figures in world politics, government, monarchy, aristocracy, media, business and so on. The criminality is spread across so many people that the Clinton’s activities will automatically implicate and incriminate untold numbers of very prominent public figures. People who they helped, and people who helped them.

The ramifications would be shattering for the public perception of world government and popular culture. On every continent, the people would realize, without question, that they have been lied to for generations in almost every conceivable area of life. 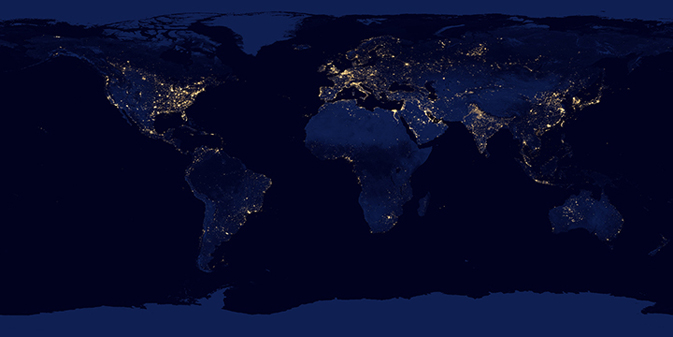 “Composite map of the world assembled from data acquired by the Suomi NPP satellite in April and October 2012.“

“During the extraordinary 2016 Presidential Election, a number of things really knocked my socks off, and first and foremost among those was my realization of just how many people have been tricked… Millions of otherwise decent people who have been scammed, conned, into embracing imperial collectivism, into this vile democratic socialism.

How did this happen? Through imperial sequestration of our education systems.

Everyone born after about 1960, if they went to normal elementary schools, primary schools, high schools, colleges, universities, and whether they were regular ones or super posh exclusive ones, has been subject to the most vigorous imperial indoctrination; a very disempowering philosophy embedded in teachers and educational materials, the course work, the curricula, and everything to do with schooling. And all of it essentially persuading young people to devalue individualism, to veer away from discrimination and judgment, to not think for themselves but instead just parrot the dogma of imperial think-tanks who’ve already determined cultural policy. It is a very real and desperate thing, this long sequestration of the education system…

The cumulative effect of imperial conditioning in education means that by about 25, most people are dead inside; already philosophically complacent within themselves and entirely obedient to the collective rules. The authorities tell them what to do, and they do it. No need to formulate ideas for themselves because the media figure heads – the state intellectuals, the politicians, the celebrities – do that for them. Pick up the prescription and swallow. An irreversibly conditioned populace walking around Seattle and Portland and San Diego and Chicago and LA… and London and Liverpool… and Toronto and Vancouver and Sydney… and Mexico City… and Tokyo, everywhere.

Any man, any woman, who does not have innate resilience to external control will be caught in the net and processed, programmed for nondiscrimination and happy subservience. Dead inside.” ~Neil Kramer

“December’s Capricorn New Moon is the last lunation of 2016. Occurring just three days before the New Year, this is a moment to step back, reflect, and take your time in considering your present options and decisions. Every New Moon is a collective moment of lower energy conducive for healing, rest, and meditation. At this stage of the lunar cycle, the Moon invites us inward to recharge and consolidate…

Occurring in the sign of Capricorn, this New Moon favors conscious solitude… Consider the importance and value of inner journeying and self-reflection. And consider how much insight you already have within you. Before we enter the New Year, this lunation is a great way to gain perspective about the past year so that you can more effectively plan for your future…

This dark of the Moon time also carries a dynamic creative and visionary potential as well as an opportunity to see beyond the old ways of doing things. As the new year approaches, it might also be wise to hold off on implementing resolutions; there’s a lot to reconsider and think about with this New Moon. Sit back, relax, and turn away from outer distractions. Allow this New Moon to gift you with the focus needed to reconsider your goals, strategies, and direction.”